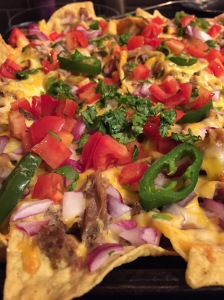 Crockpots are awesome. They’re relatively low maintenance and fail proof. A win, win combination. Last Wednesday night, I stopped off at the store and purchased a 6lb. pork shoulder roast. I stabbed it with a knife all over, placed it in the crockpot and sprinkled about 3 – 4 tbsps. of the Tex-Mex seasoning I make and keep on hand for the ready, set it to low, turned it once in the morning before heading off to work and then didn’t mess with it again until dinner time on Thursday (and by messing with it I mean removing from the crockpot, shredding it, and serving it up). On Thursday morning, I brought out another crockpot added about 3 cups of dried pinto beans, chopped up some thick cut bacon, added some salt, filled with water and set that to low for dinner that night: carnitas, beans, tortillas, guacamole & chips. I knew we would have plenty of leftovers and I also knew exactly what I would do with them: Carnitas Nachos on Saturday night.

Saturday night, I preheated the oven to 375 degrees and lined a baking sheet with a layer of tortilla chips. I took a cup of the leftover pinto beans and pulsed them a few times in the food processor – instant refried beans. I spread them out on the tortilla chips, distributed the shredded pork meat, topped with Colby Jack cheese, then added some diced red onion and sliced jalapenos before popping it in the oven for 15-20 minutes until the cheese was nice and melted. I then switched the oven off and turned on the broil for a few minutes. After removing it from the oven, I topped with fresh chopped Roma tomatoes and cilantro. I placed it in the center of the table and dinner was served. No plates, no fuss, no mess just pull from the baking sheet and eat.

This entry was posted in Mexican, Pork and tagged Tex-Mex Seasoning. Bookmark the permalink.