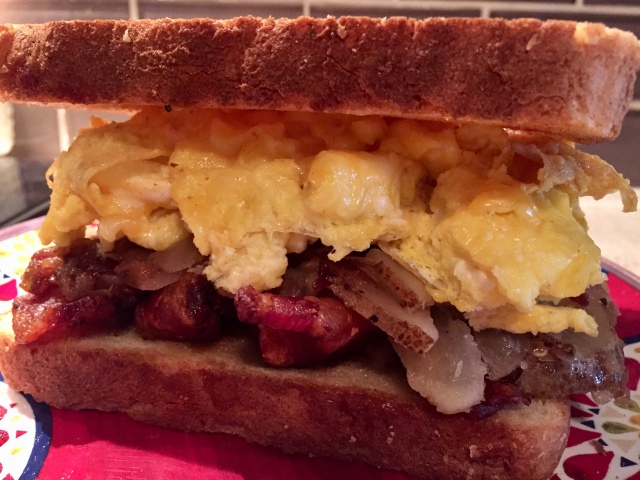 Most days I only eat 2 meals a day; this is always a given on the weekend. Typically, I’m not hungry for hours after waking, and a cup of coffee with cream, hot or iced, keeps me sated until lunch. That being said, I love brunch for the time of day and how it generally consists of a little bit of everything & then some. This breakfast sandwich (that I often make for brunch) is one that keeps me full until dinner. No particular recipe, per se, but always consists of a hearty bread (in this case Sourdough), one that can withstand the weight of thick cut bacon, breakfast potatoes, and cheesy scrambled eggs. Normally, when I make breakfast/ brunch it’s for a family of 4 and I’m the only one who assembles it all into a sandwich, whereas the others eat it all separately.

I always start by baking the bacon first at 425 degrees, especially since I use thick cut Hickory smoked bacon, it takes the longest. I line a baking pan with foil, spray with non-stick spray, and arrange the bacon on the pan, pop it in the oven for 12 minutes and get started on the potatoes.

One large potato is generally enough, sometimes two if they’re on the small side. I slice the potato, fairly thin and in a small pan, over medium high heat, melt a little butter and add a bit of extra virgin olive oil. I toss the slices of potato in and add some fine chopped onion and garlic as well. I give it a few stirs, before adding a bit of water as it helps to soften and cook them, and place with a cover. I stir and toss throughout, adding more water if necessary, and once they’re near done, I season liberally with salt, fresh ground pepper, and a shake or two of red pepper flakes.

At the 12 minute mark of the bacon, I remove from the oven and turn each slice over before returning to the oven to for another 12 minutes or so. Once it’s done, I transfer to a plate lined with paper towels to soak up the grease, and add another couple of paper towels to blot the top of the bacon.

I lightly beat the eggs, sprinkle with Lawry’s Seasoning Salt, and cook them in a pan coated with a little extra virgin olive oil over medium heat. Once they are near scrambled, but still wet enough, I sprinkle with Colby jack cheese, stir to incorporate, and cook until finished.

Last, but not least, toast the bread, butter if you like, and assemble your very own big breakfast (or brunch) sandwich. Enjoy!

This entry was posted in Breakfast, Uncategorized. Bookmark the permalink.