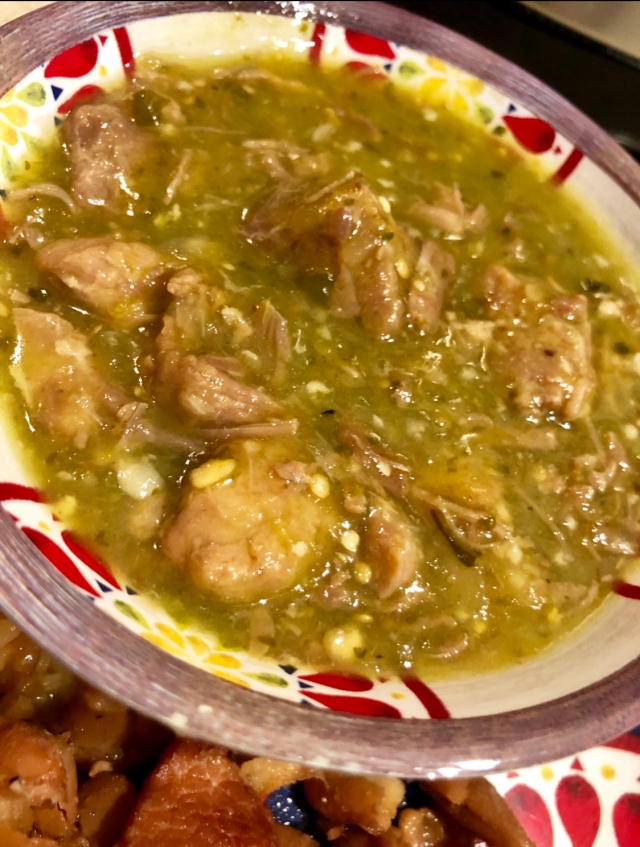 You know those moments when you order something and you’re salivating just thinking about it and then when it arrives and you take the first bite and you experience a huge, colossal let down because it has next to no taste? You’re left disappointed and feeling a bit ripped off because you just paid money for that? The upside though is when the exact opposite happens and your taste buds are happy, happy, happy and it was money well spent and you know you’ll definitely be back. You know what’s an even better feeling? Making it yourself, realizing it tastes so darn good, and your people are digging it just as much and you can’t help but feel so very accomplished. I’ll take that feeling any day of the week.

Let me introduce you to pork chile verde. Mmm mmm! I made a big ol’ pot of it and we enjoyed it all week long. When I first made it, I served it with charro beans, Spanish rice, and flour tortillas. But it also goes so well over scrambled eggs with toast or tortillas or just warmed up in a bowl all by itself.

Season the pork cubes with S&P.

Remove the stems from the Anaheim pepper and husks from the tomatillos. Cut both the peppers and tomatillos in half, and lay cut side down on a baking sheet lined with aluminum foil & sprayed lightly with non-stick spray. Turn broil onto high and allow to broil for 5-7 minutes, or until the skin is lightly blackened. Allow the tomatillos cool to handle. Place the peppers in a bowl, cover with Saran wrap and allow to cool. Remove the blackened skin and seeds.

In a food processor, add the jalapeños, cooled peppers, tomatillos, garlic cloves and cilantro and blend until finely mixed.

Using a large cast iron skillet, or other deep skillet, heat olive oil to medium-high heat and cook, browning the pork on all sides. Given the amount of meat you have, it is best to do this in increments to ensure all pieces are cooked evenly and without crowding. Using a slotted spoon, remove cooked pork chunks to a bowl. Remove most of the fat from the pan, leaving enough to sauté the onions and remaining garlic. Cook for approximately 5 minutes, until onions are translucent and fragrant.

Using a large stock pot, add the browned pork, sautéed onions and garlic, chicken stock, tomatillo sauce, oregano, dash of cloves, and mix together to incorporate. Bring to a boil and then reduce to low heat, allowing it to simmer for at least for 2-3 hours (though longer is just fine, 4-5 hours), stirring periodically. This will allow the pork to become fork tender. Season accordingly, if needed.

*Note: I cut the pork the night before and seasoned it before placing in the refrigerator. I am so glad I did this as it took me much longer than I’d anticipated to cut it into pieces. Also, seasoning it the night before, allows the salt to do its work properly.

This entry was posted in Mexican, Pork, Uncategorized. Bookmark the permalink.