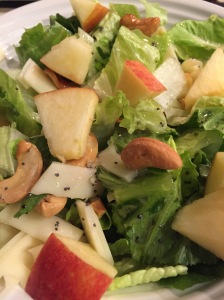 I’m not sure where I got this recipe. I’m thinking my mom, my sister-in-law, a friend…I don’t really know and it really doesn’t matter because it’s a good one. I used to make this a lot for myself years ago, and like it sometimes happens, I’d make it a whole bunch, then get burned out on it, ignore it for a while, but like all good things, come ’round again.

I introduced it to the family for the first time this past week as a side. The girls turned up their noses (they honestly don’t believe me when I tell them they will like these things as they age) so in addition to their chicken, they had apples and carrots. Chris, at first, said he’d pass on the salad as well, and later to my surprise, he dished himself some into a bowl. To even more of my surprise, he announced, as he was nearly done with it, “I can’t believe I’m about to say this, but that was a really good salad.”

I nearly fell off my chair and had to ask the girls for confirmation of what I’d just heard.

In a large bowl, toss together the salad ingredients. In a liquid 2 cup measuring cup, whisk together vigorously the dressing ingredients to emulsify. Drizzle over the salad.

This entry was posted in Salads, Vegetarian. Bookmark the permalink.