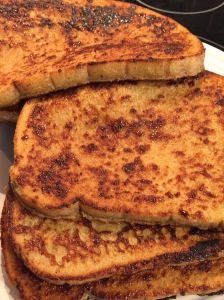 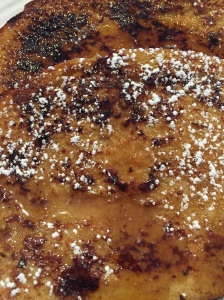 I’ve noticed, as of late, my family puts in their requests for weekend breakfast meals early on in the week. This one came from Leah, “Mom, it’s been soooooo long since you’ve made French Toast, will you pleeeeaaaase make it this weekend?” She also had two friends spend the night, and since I usually aim for a good homemade breakfast meal on the weekends, she got what she wanted plus eggs and bacon.

This dish is another one that I really just sort of wing it. My thought is that as long as you have a hearty bread to build upon, you’re good to go. There’s nothing worse, in my opinion, than mushy French Toast. For years now, when I make this, I buy a loaf of Panera’s Country Miche and have them slice it thin. Typically, I’ll use some of the bread for Tuna Melts and the remainder of it for French Toast, but this weekend, I used the entire loaf so that the girls will have leftovers all week long.

A large part of the reason I created this blog is a place to house all my recipes, but also, so that when the girls get older, they can come here, pull up what they want to make and go from there. With that in mind, I tried to pay more attention to what I put in it, so they in turn wouldn’t have to ‘wing it’! Sorry, girls. I didn’t do much better with measuring and leveling. It is what it is!

Whisk together the above listed ingredients. Heat the electric griddle to 325. Melt a tbsp. of coconut oil and spread among the griddle. Dip each slice of bread into the mixture, shaking off the excess, and cook on each side until golden brown. Reapplying coconut oil as needed.

Serve hot off the griddle with warmed maple syrup and a sprinkling of powdered sugar.

This entry was posted in Breakfast. Bookmark the permalink.