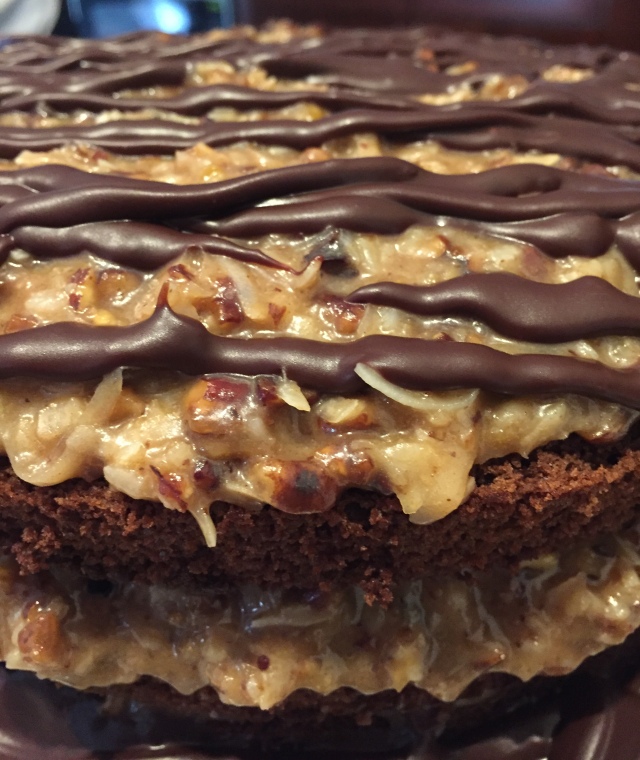 Let’s take a moment and behold the gloriousness of German Chocolate Cake. 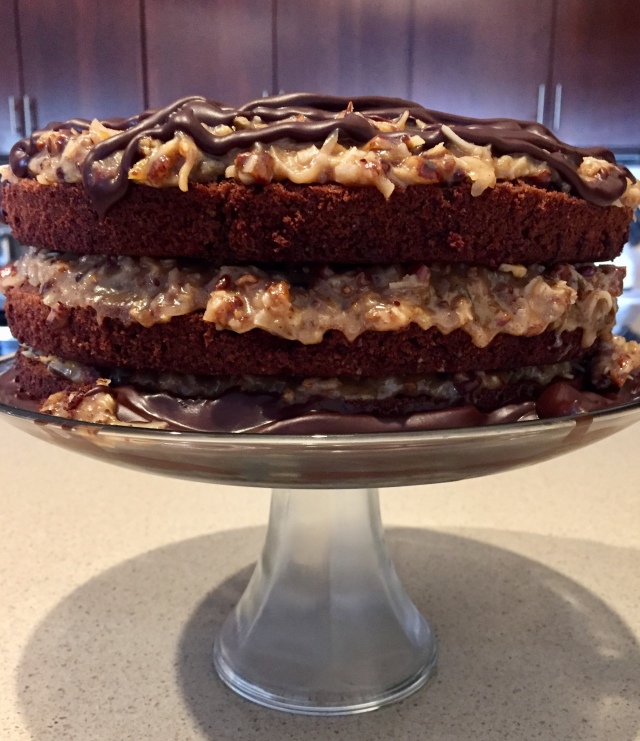 This is by far one of my favorite cakes and surprisingly one that I had not previously made. Growing up, it was always one my mom would make for my birthday – out of the box and can of frosting. That’s still good, but for my birthday this year, I wanted to try my hand at making it homemade. And, let me be the first to tell you, the secret of the frosting is browned butter! Brilliant, of course! It was perfection and everyone enjoyed it. Happy Birthday to me!

Preheat the oven to 375 degrees. Line and grease three 9 inch round pans; set aside.

Place chopped chocolate in a medium bowl. Pour hot coffee over, give it one minute, then whisk until smooth and chocolate is melted. Whisk in buttermilk; set aside. In another bowl, beat egg whites with clean beaters until stiff; set aside.

In a large bowl, use same beaters you used to beat the egg whites to cream together the butter, sugars, and salt together until fluffy. Beat in yolks and vanilla until smooth, then add in the buttermilk-coffee-chocolate mixture. Sprinkle baking soda over and beat in well to combine, scraping down sides & bottom of bowl as you go. Add cocoa powder and flour and beat until just combined. Fold/stir in a quarter of the egg whites to loosen batter. Fold in rest gently, just until no white spots remain. Do not overmix. Divide evenly between prepared baking pans. Bake for 21 to 25 minutes, until a toothpick inserted into the center comes out clean. Immediately run a knife around the cake but cool in pan on rack for 10 minutes before inverting onto a wire rack to cool completely.

To toast the pecans & coconut, spread out on two separate small baking sheets. Bake in oven at 350 degrees for 3-5 minutes, toss, continue baking another 3-5 minutes, toss, and repeat one more time. If you want, you can pulse the coconut a few times in a food processor if you like it less stringy. Place toasted pecans and coconut in a bowl; set aside.
In a large saucepan, melt butter and keep cooking after it has melted, stirring often, until it becomes toasty brown near the bottom of the pan and smells heavenly. Remove from heat, pour into a small dish to cool slightly and let saucepan cool before cooking filling.
Whisk egg yolks, half-and-half, sugars and salt together in empty saucepan until blended. Very slowly drizzle in semi-cooled browned butter, whisking the whole time. If your yolks and half-and-half were cold (which is fine), the butter might take on a clumpy appearance as it solidifies in the mixture; this is not a problem. Return saucepan to the stove and heat over medium-low, stirring the whole time so that it doesn’t scorch at the bottom, until the mixture is hot, steamy, and thick enough to coat a spoon. Do not let boil.
Remove from heat and stir in vanilla extract & pour over bowl with pecans and coconut, stirring once to combine. Let filling cool before using. It will thicken up once cold.

Heat cream and instant coffee in microwave until a small boil forms. Pour over chocolate chips, allow to sit for one minutes, and stir until smooth.

Place one layer of cake on cake stand, top with 1 cup of filling in the center of the cake. Using a an offset spatula, spread evenly and push filling just until the edge. Repeat with remaining layers. Drizzle with ganache.

*The recipe listed above was doubled for 9 inch cake pans. To make using 6 inch cake pans, half the recipe. I also doubled the ganache recipe because I was in a groove, but realized afterwards, halving the recipe allows for just enough drizzle. If using the full recipe, you can drizzle ganache between the layers of cake.

*In the future, I would start with the filling since it takes a while to cool, and bake the cakes second.

This entry was posted in Cake, Desserts, Uncategorized. Bookmark the permalink.