I first tried my hand at this recipe several years ago and it was disappointingly lackluster. At the time, my mom jotted down tips and suggestions and it’s been hanging out in my 3-ring binder ever since. After consulting her notes, and viewing several different recipes, I came up with a conglomeration which resulted in a worthy post.

Preheat oven to 400 degrees. Combine crust ingredients and press into a 9×13 baking dish. Bake for 10-15 minutes until lightly golden brown; allow to cool completely. Since this is a dessert that doesn’t require further baking, now is the time to toast the coconut for the topping. Reduce heat to 325 degrees, spread 1 cup of sweetened coconut on baking sheet. Place in oven for 9 minutes, stirring every 3 minutes to prevent the coconut from the burning; set aside.

In bowl, whisk together half and half and egg yolks. In a large saucepan over medium heat, whisk together the sugar and cornstarch slowly add in the half & half/ egg yolk mixture until fully incorporated. Turn the heat up to high and stir continually until the sauce has thickened, coating the whisk. Remove from heat, stir in the butter, coconut, & coconut extract until well combined. Allow to cool for a few minutes. Transfer to a bowl, cover with plastic wrap, and place in the refrigerator to cool completely, an hour or so. Once completely cooled, spread over the cracker crust.

Beat together the cream, slowly add in the sugar and vanilla extract. Beat until cream forms peaks. Spread the whipped cream over the pie filling layer and top by sprinkling toasted coconut all over. Refrigerate until time to serve. Enjoy! 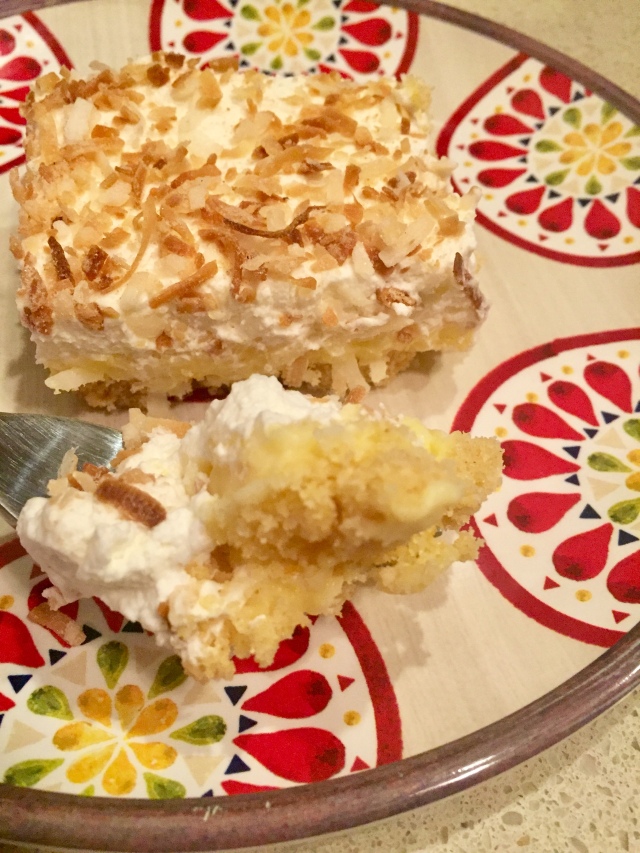 This entry was posted in Bars/ Brownies, Desserts, Pie, Uncategorized. Bookmark the permalink.