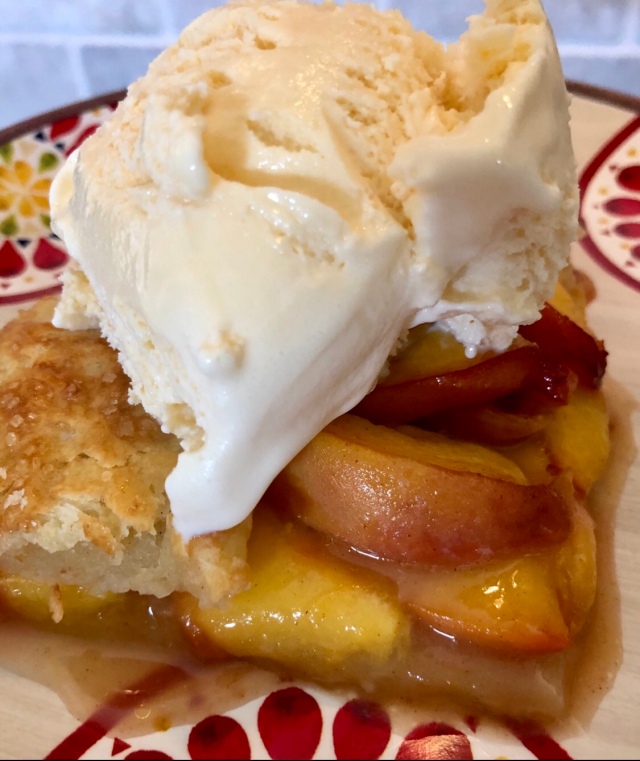 A few month ago, Chris & I were watching a food show on Netflix & one of the segments showed a woman preparing a peach galette (something I’d never heard of before) but the seed was planted, & for months now I’ve been thinking about this dessert, waiting patiently until peaches were in season. Incidentally, this is the second time I’ve made this dessert because initially I was presented with sour faces from the fam & had to listen to them groan about ‘making something we all like.’ Until, that is, they begrudgingly tasted it & decidedly agreed it was so good & I should make it again soon, like the next day.

In a food processor, pulse together the flour, sugar, & salt until mixed together. Add the frozen, cubed butter & pulse 8 times until the butter is pea sized. Add the water 2 tablespoons at a time, pulsing after each addition, until the dough starts to come together.

Turn onto a clean, flat surface & use your hands to form into a disc. Don’t over knead; just work it until it comes together. Sprinkle a little flour to dust all sides of the disc, wrap with plastic, & place in the refrigerator for an hour to chill.

Preheat the oven to 425 degrees.

Whisk together the flour, sugars, & cinnamon in a small bowl. Slice the peaches. Add the vanilla extract to the peaches; stir gently. Add the flour mixture a few tablespoons at a time, stirring gently after each addition to coat the peaches.

On a lightly floured surface, roll out the dough to 12 – 14 inch diameter. Gently lift & place on a rimmed baking sheet or round baking dish. Arrange the peach slices in an overlapping pattern in a single layer in an 8 – 9 inch circle. Dot with a little butter. Fold the remaining outer dough edges in an accordion fashion.

Whisk together the egg for the egg wash & brush the outer exposed dough. Sprinkle dough with Turbinado sugar.

Bake for 17 – 20 minutes, until dough is golden. Remove from oven & allow to cook for 15 minutes before serving.

This entry was posted in Desserts, Pie. Bookmark the permalink.